Environmental Review, Inc. provided suggestions such as increasing protectiveness measures for Endangered Species (Stellar Sea Lions and Harbor Seals) with designated critical habitat areas near the launch pad site. Suggestions included adding biological and acoustic monitoring procedures which were absent from the proposed document. Protective monitoring measures should include pre- and post-launch monitoring, video surveys, and noise monitoring during launches as were conducted previously. Other protected species nearby include the gray whale, humpback whale, sea otter, northern fur seal, Dall’s porpoise, harbor porpoise and orcas however those species were not identified as needing protectiveness measures. 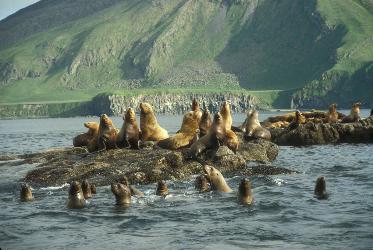 A launch mishap occurred on the launch pad in 2014 which resulted in a nearby beach closure and a response action by a hazardous materials team to clean up rocket propellant and debris; however that also wasn’t mentioned in the draft report. The environmental group suggested that lessons learned from the launch failure should be included.

The environmental group requested itemizations of hazardous materials associated with each launch and inquired as to whether armor penetrating depleted uranium was planned for use in the head of each missile. The program plans to use 1,800 pounds of hydrochloric acid per year. The group asked if studies had been conducted to show whether spreading carbon and aluminum particles up to 4 millimeters in size along the flight path would have any detrimental effect on protected species and feeding salmon protected under the Magnuson-Stevens Fishery Conservation and Management Act.

Benjamin Wagner, Project Manager with Environmental Review, Inc. is concerned that important issues were not addressed in the proposed assessment report. He said “The Missile Defense Agency should precisely report data which is both technical and ecological. The sensitive habitats around Kodiak Island are being polluted. The missing information is important to people of Alaska. They deserve to know how these species and food sources are being affected.”